In order to improve the electronic control system on the GM 6T40 transmission, General Motors consolidated the transmission control module/TCM, shift solenoids, torque converter clutch/TCC solenoid, and pressure control solenoid into a single unit called the 6T40 TEHCM. It’s bolted to the 6T40 valve body, and if one of those components fails, you have to replace the entire unit. The GM 6T40 transmission can be found in the Cadillac SRX 6T40, Chevy Impala 6T40, Buick LaCrosse 6T40, Chevy Malibu 6T40 and many others. Although the Transmission Electro-Hydraulic Control Module can be fairly reliable, 6T40 TEHCM problems can still happen. So let’s find out what you can do about them. 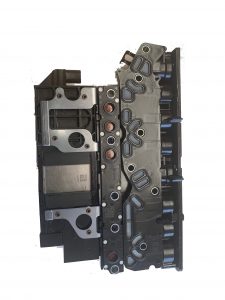 rior to 2012, the 6T40 TEHCM Gen 1 used variable bleed type solenoids, with 3 pressure switches to determine (the data is sent to the TCM) if a clutch has been applied or released. The 6T40 TEHCM Gen 2 used different programming, variable feed type solenoids, and it ditched the pressure switches in favor of a Clutch Pulse Learning function to smooth out clutch operation.

The 6T40 TEHCM is a single component that contains the following transmission parts:

Problem – Due to problems with the 6T40 TEHCM, drivers may experience a number of transmission problems that include slipping with a complete lack of reverse gear, slipping, a shift flare or or the complete lack of 3rd or 5th gears.

Solution – Before replacing the 6T40 TEHCM, a number of things will need to be ruled out first, including the valve body, transmission pump, 3-5-R housing, clutch and piston.

If problems are found with any of those components, then the GM 6T40 TEHCM will need to be replaced.

In this new global economy, General Motors, along with many other major manufacturers, have switched to “global platforms” that meet the government regulations in all markets. From emissions to safety compliance, these new global cars are saving GM a boatload of money because they only have to manufacture single components to be used around the world. An unfortunate byproduct of the GM Global A Architecture electrical system, is that Europe and Australia require automakers to secure vehicle modules in a single “environment” to prevent them from being used on other vehicles and ultimately sold on the black market. This theft deterrence measure also allows GM to simplify its diagnostic processes, which obviously saves them money. But all of that can create problems with programming and replacement.

The following modules cannot be swapped into another vehicle:

These modules are hardcoded with the vehicle’s VIN number, which allows the GM Global A Architecture to recognize the different modules on the network. There is no way to change the VIN number as there was before. Therefore, if a used 6L or 6T TEHCM is installed, the ECU will automatically command it into limp mode, where it will prevent the engine from starting, thus rendering it useless.

Installing software updates to a GM 6L or 6T TEHCM

Thanks to advances in manufacturing and technology, today’s transmissions are much more efficient than they have ever been. The downside of that is, the electronics now command the mechanical functions. Which means that software updates can often fix a mechanical issue. However, the GM Global A Architecture often prevents software updates to the 6L or 6T transmission. The technician may see a “program failed” error message when they go to install a software update to the TCM/TEHCM, at which point, the transmission will be in locked in limp mode.

This issue is sometimes caused by low battery voltage, a wiring issue, interference from aftermarket components, or an issue with the connection between the vehicle and the scan tool or pass-through device. It could also be that the new software/calibrations are not compatible with the TEHCM.

Because of how the GM Global A Architecture functions, it is now impossible to overwrite the VIN number programmed into the TEHCM. Which means a ‘blank’ TEHCM will have to be installed, in order to program it work with the vehicle.

Vehicles with the GM Global A Architecture include:

Due to the design of the 6T40 TEHCM, it’s not possible to simply replace a failed component like a 6T40 pressure switch or solenoid. Instead, you have to install a new 6T40 TEHCM to make sure that all of the components work together properly and wear at the same rate. There are of course, many aftermarket kits that say they can allow you to replace individual components on the TEHCM. But that will only offer a short-term fix, because other components within the TEHCM may be damaged or worn as well. If you replace say, a pressure switch. It will start operating in a much higher capacity than the other switches on the TEHCM, which can lead to increased wear and component failure.

The 6T40 TEHCM is located inside of the transmission on the 6T40 valve body. Objectively, it is a fairly simple repair: simply remove the transmission pan, remove the valve body, unbolt the TEHCM from the valve body and install the new one. But it does take a bit of experience to not damage anything on the valve body or inside the transmission during the install. You must also have the correct tools and a clean workspace to do the job. If you try to go to the cheap route and just replace an individual solenoid or pressure switch, you’ll have to pay the labor charge all over again when one of the other components fail. So if you want to keep your vehicle on the road for as long as possible. And avoid paying more money to fix transmission problems that could have been avoided, you should consider upgrading to a remanufactured 6T40 TEHCM from a company like Street Smart Transmission.

The 6T40 TEHCM is a complicated little device that sends and receives data from the ECU to the TCM, then distributes actionable commands out to the various components like shift solenoids and pressure switches. It also receives data from the various components, which it then sends back to the TCM and ECU, so it can decide which shift program to use for a given situation. All of this happens along the data bus, which is extremely important to making everything work. That’s why each Street Smart Transmission 6T40 TEHCM build starts with a thorough test of the electrical and communications system. If the core fails, it’s either repaired or completely discarded. Next, all of the pressure switches are replaced with upgraded switches that can withstand heat, vibration and stress much better than the OE pressure switches. New solenoid retainers, filter plates, fluid conduits, pushrods, O-rings and connectors seals are also installed (each remanufactured TEHCM comes with all gaskets, seals and grommets that will be needed for the installation). Once complete, each remanufactured 6T40 TEHCM then undergoes an automated vehicle simulation test, that accurately re-creates on-road driving conditions. This ensures full functionality and a hassle-free installation.

So if you’re serious about extending the life of your vehicle, click here to learn more about the remanufactured 6T40 TEHCM from Street Smart Transmission.

Scroll back to top