Torque converter problems are sometimes misinterpreted as symptoms of a failing transmission. Unfortunately, this can lead people to think that they need to spend thousands of dollars to rebuild or replace their automatic transmission when the cost to replace a malfunctioning torque converter is considerably cheaper.

A local auto repair shop will be able to determine whether or not the problem lies in the transmission itself or the torque converter. Finding a reputable shop is very important because as we have mentioned, the symptoms can be very similar and a transmission replacement is considerably more expensive.

However, diagnosing the cause of a transmission issue isn’t easy. In many cases, the torque converter will not actually be the source of the problem (you might just have a fluid leak!). The purpose of this guide is to simply help you narrow down the possibilities and educate yourself before you get your transmission checked out.

What Does a Torque Converter Do?

In a nutshell, a torque converter is a fluid coupling that transfers torque from the engine to the transmission. It is mounted between the engine and transmission, bolted directly to a ‘flex plate’ which is spun by the crankshaft. 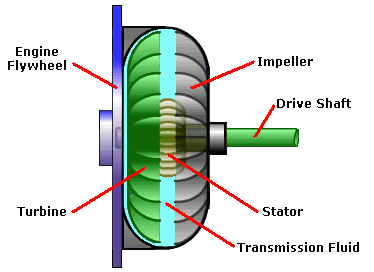 Internal combustion engines create power by burning fuel that forces the pistons to turn the crankshaft located at the bottom of the engine. This rotational force is transferred to the transmission by the fluid pressure inside the torque converter. 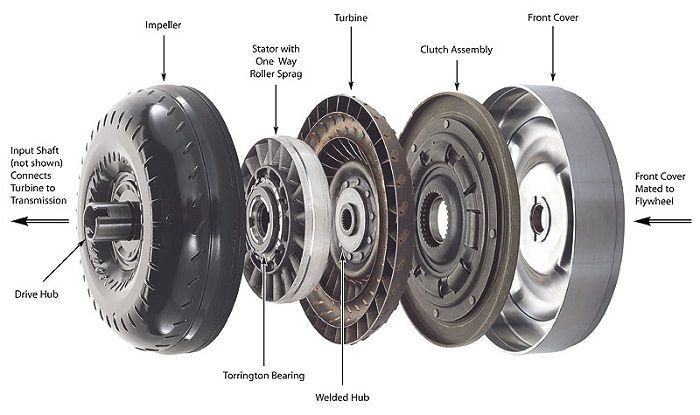 Inside of the torque converter cover lives a series of propeller-like blades called the pump. This assembly spins in unison with the engine crankshaft, forcing transmission fluid onto another blade assembly called the impeller. This second set of blades is connected to the transmission input shaft. The amount of hydraulic pressure that it creates inside the transmission dictates the gear and ultimately, the speed of the vehicle.

The impeller’s speed is regulated by the engine side of this hydrodynamic circuit (ie. speed of the pump blades). When the vehicle is stationary, or the driver applies the brakes, the impeller will slow considerably, while the pump continues to spin. This allows the torque converter to act like the clutch in a manual transmission – it allows the engine to continue running while the vehicle is at a complete stop.

Once the transmission fluid has been hurled onto the impeller blades, it has to return to the pump in order to keep the cycle going. Since the fluid is now flowing in a different direction than the pump, it has to be reversed to avoid slowing down (and stalling) the engine.

To do this, a third finned wheel called the stator is located between the two turbines on the transmission pump shaft. Its blades are precisely angled so that when the transmission fluid hits them, it reverses direction and gets channeled back to the pump. When the vehicle stops, its built-in one-way clutch causes it to stop spinning, breaking the hydrodynamic circuit.

Once the vehicle is in motion, the stator’s one-way clutch allows it to start spinning in the same direction as the other turbines, reversing the fluid flow and completing the hydrodynamic circuit.

After all of the transmission gears have been shifted through and the vehicle has reached cruising speed, the lockup clutch engages, connecting the front cover of the torque converter (aka the pump) to the impeller. This causes all of the turbines to work together in a direct drive/overdrive scenario.

It isn’t easy to isolate and diagnose a torque converter issue without taking the transmission/drivetrain apart, but there are several symptoms to look for. A few of the signs of a malfunctioning torque converter include: shuddering, contaminated fluid, gears change at high RPMs and strange sounds such as clicking or whirring.

Since a torque converter is responsible for translating engine torque into the hydraulic pressure needed to shift gears inside the transmission, a damaged fin or bearing can cause the transmission to delay a shift, or slip out of gear.

Slipping can also be caused by there being not enough or too much fluid in the transmission. You may also experience a loss of acceleration and a noticeable reduction in your car’s fuel economy.
Be sure to check your fluid levels before taking your car to a shop.

If the temperature gauge indicates that your car is overheating, it could be a sign that there has been a drop in fluid pressure and there is a problem with your torque converter. If a converter is overheating, it won’t be able to transfer power from the engine to the transmission. This results in poor throttle response, and excessive wear and tear on the internal workings of the transmission.

Low fluid levels or a malfunctioning solenoid can also cause a transmission to overheat.

If the lockup clutch inside the torque converter is starting to malfunction, you may experience shuddering at around 30-45 mph. The sensation is very noticeable and typically feels like you’re driving over a rough road with many small bumps. As the converter switches over to direct drive, a worn lockup clutch can make the transition difficult, resulting in this sensation. The feeling may start and stop abruptly and may not last long, but if you’ve experienced it several times, it’s time to get your transmission checked.

A torque converter is filled with automatic transmission fluid (ATF). If the fluid is contaminated, it can do damage the parts inside. This can result in worn bearings on the stator, or damaged fins on one of the turbines.

If you notice a significant amount of black sludge/grime/debris in the fluid it could mean that the converter or transmission itself is damaged. In this case, change the fluid and drive around for a while before checking the fluid again. If the problem persists, get your car checked by a professional.

If the torque converter is broken, it won’t be able to transfer the engine’s rotational force into hydraulic pressure correctly. This will result in the transmission taking longer to engage the engine, causing the stall speed to increase. Here is how to do a stall speed test. You’ll have to find out what your vehicles stall speed is beforehand (typically 2000 to 2500 RPM).

How to Diagnose the Problem

Here is how you can try diagnose the problem yourself. At each step, listen carefully for unusual slipping, shuddering, lurching forward or strange noises:

Do Not Drive With a Broken Converter

Important to note – a converter can slowly fail over the course of several weeks or even months before it completely breaks down. Driving a vehicle with one that is damaged can be risky as it can completely disintegrate when it breaks down – adding metal debris into the transmission fluid. The contaminated transmission fluid can then make its way into the transmission and cause significant damage or even complete failure, turning what could have been a simple converter replacement into an expensive transmission repair or replacement. To prevent this, pull off the road when it is safe to do so and shut off the engine.

There are a few reasons why problems can occur. Don’t assume what the problem is until you have your transmission looked at, but here are some general ideas of what it could be.

The impeller, turbine and stator use needle bearings in order to turn freely. The bearings separate these rotating components from the converter housing. If these bearings are damaged, you’ll notice reduced power, strange noises and bits of metal in the transmission fluid due to metal on metal contact/grinding.

If you notice a transmission fluid leak coming from the bell housing, then you might have a damaged torque converter seal. If your torque converter can’t hold the proper amount of ATF, then it won’t be able to transfer power from the engine to the transmission effectively. This will result in overheating, shifting problems, strange noises, higher stall speeds, and slipping between the gears. The bad seal will need to be found and replaced.

Automatic transmissions have a number of clutches located throughout the assembly. A torque converter clutch is responsible for locking the engine and transmission into direct drive.

If the torque converter has been burned by overheating, become jammed/locked up due to distortion or contaminants in the transmission fluid have damaged the friction material on it, then your car may stay in gear even though you come to a stop. The converter can also shake and not lock itself into direct drive if the friction material on the clutch plate has worn away.

A torque converter clutch solenoid regulates the amount of transmission fluid that the converter’s lockup clutch receives. If this electronic device can’t accurately meter the fluid pressure, then the lockup clutch will not work properly as a result of too much or too little fluid supply. This can result in loss of the direct drive function, poor gas mileage and engine stalling.

If you’ve noticed one or more of the above symptoms, then it’s possible that your torque converter is malfunctioning. The cost of getting it repaired can be higher than simply replacing it, so be sure to have a mechanic/technician take a look.

If you plan to do the work yourself, then you’ll be looking at a repair cost between $150 and $500.
Repair shops will charge between $600 and $1000 to replace a torque converter.

The torque converter itself is relatively inexpensive (between $150 and $350, depending on the vehicle), but 5-10 hours of labor is involved since the transmission must be removed in order to replace the torque converter.

The fluid should also be flushed/changed at the same time, which may or may not be included in the price a shop gives you.

What problem do you think your torque converter has? What symptoms is your car experiencing?

Scroll back to top
321
0
Would love your thoughts, please comment.x
()
x
| Reply