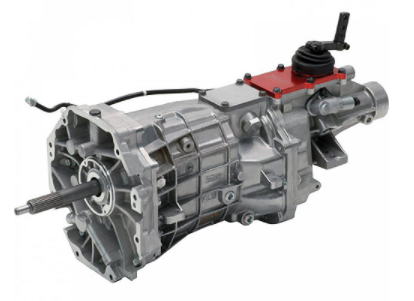 Back in 1992, Borg-Warner was asked to develop a heavy duty 6-speed manual transmission that could handle the immense torque of a V10 engine that would be installed in forthcoming supercar called the Dodge Viper.

This gearbox was known as the T-56, and General Motors was so impressed by its performance, they made the T-56 transmission a no-cost option on the redesigned 1993 Chevrolet Camaro Z/28 and Pontiac Trans Am.

This transmission was later used in a number of other high performance applications, including the Ford Mustang Cobra and Cadillac CTS-V. Although there were a number of differences to the case design, the internal components are basically the same.

Nearly every application of the T-56 uses a hydraulic clutch, however the Mustang Cobra uses a mechanical clutch with an 11-inch clutch disc. The case and bellhousing were made from aluminum, and the transmission features internal stops rather than stop bolts inside the shifter mechanism. And all of the synchros are made from brass in Ford and GM applications. However, the Dodge Viper T-56 transmission used stainless steel synchros.

Tremec took over production of the T-56 in 1998, and they eventually introduced a more robust version called the Tremec TR-6060, which was used in vehicles that produced more than the T-56’s 450 lb-ft torque capacity.

Unless your vehicle was originally designed for a T56 transmission, making it fit and installing the necessary hydraulic clutch could require some creative fabrication. However, one of the biggest issues that many people don’t think of, is this gearbox’s Bonneville gear overdrive ratios.

On paper, installing a T56 transmission could drop the motor down 600-800 rpm’s when you’re cruising down the road. That could result in less engine wear and lower fuel consumption.

But cruising along at 1500 RPMs with a high performance engine, can require a lot of horsepower (i.e. Speed) to overcome the steep ratio of 5th & 6th gears. If you’re running a motor with a maximum of 450 lb-ft of torque, then the 0.74 and 0.50:1 ratios should be fine. Otherwise, you may have to modify your driving behavior.

The T-56 transmission was one of the first 6-speed manual transmissions on the market, and some would argue that it was one of the best. It can easily handle the abuse of performance driving, thanks to OE features like constant-mesh synchronized gears, tapered roller bearings, speed gear needle bearings, and two overdrive gears. Plus, it’s still a joy to use when you’re just puttering around town.

Scroll back to top
0
0
Would love your thoughts, please comment.x
()
x
| Reply