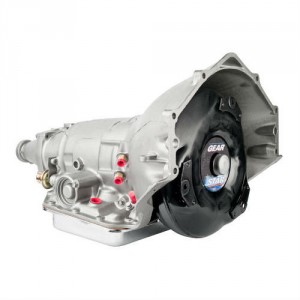 It has a long history, dating back to 1969 as a replacement for the Powerglide transmission. Buick and Chevrolet worked together to design and build the Turbo 350. Because of this duality, it was also called the CBC350, or the Chevy-Buick Combined Transmission. The TH350 has a solid balance of strength and size, able to fit in smaller vehicles.

The Turbo 350 got plenty of exposure in rear-wheel vehicles – both cars and trucks – designed by GM, at least until 1984. It works best with V6 and V8 small block engines but was gradually phased out and replaced by the 700R4 from 1982 to 1984, after which point the Turbo 350 was no longer produced. The Turbo 350 also works well in a jeep because of its power.

Many auto mechanics looked at the Turbo 350 as a three-speed Powerglide, which makes sense because it was derived from the Powerglide. Even during development, this was its alternate name. The torque converter that it has carried over to the TH400, but largely resembles the original 1962 Powerglide from Chevrolet. The only difference is that the torque converter lacked a variable pitch stator.

The defining characteristic of the Turbo 350, at least compared to the 400, is that the 350 does not have much if any central support. Although this might seem like a drawback, it allowed the 350 to be placed into the Corvair model. The two ends are the same, which would not be the case if the transmission had central support.

Starting in 1972, the Turbo 350 received air intakes and an air baffle on the torque converter to allow air cooling. Air intakes could, however, allow debris to get into the internal workings if not properly maintained and cleaned. The most prominent models to feature air-cooled transmissions for Chevrolet were the Nova 6 and the Vega.

The main weak point of the Turbo 350 is too much play at the end. This causes the clutch drum to wobble. Combined with a small bushing, it placed more stress on the drum and pump than otherwise would have been present. Luckily, it’s an easy fix. Just put a thrust washer between the clutch and the primary planetary gear. This gets rid of the end play. It also helps to switch out the original bushing in the drum for a thicker one.

You should also consider an aftermarket case to shore up the support and the central splines. Otherwise, you risk the case cracking and damaging the internal components.

The Turbo 350 measures 21 ¾ inches long, is cast entirely of aluminum alloy and has an integrated bell housing. It is comparatively light, weighing in at only 120 pounds.The oil pan is custom-made to fit it, with a chamfer at the rear passenger side. You can look at the back of the case and find the modulator.

An offshoot version of the Turbo 350, the Turbo 350-C, featured a locking torque converter. This model was in production only for five years from 1979 to 1984. The converter employed electronic converters to make the transmission and vehicle more fuel efficient when it moved at highway speeds. If you see a plug on the left side, you have a 350-C on your hands. By adding aftermarket conversions to these transmissions, you can still make them worthwhile today, with potentially 10 percent more fuel efficiency.

It’s possible that the TH350 varies in clutch and band specs. Transmissions and motors are paired together, similar to motherboards and computer processors. The stronger the motor, the stronger the transmission. Even if you have a light-duty transmission, it can be upgraded with affordable components.

One specific upgrade is a new shift improver kit. They can reduce the wear on your clutch, reduce heat buildup, and provide faster and smoother shifts. You can also refit a stronger torque converter if necessary to match the power requirements of your vehicle.

What Engines Are Compatible with the Turbo 350?

The standard Turbo 350 can be paired with the Chevrolet small and large block engines, either V6 or V8. You can also pair it with the I6, which is an in-line engine with six cylinders in a single line. The Duke I4 is another possible compatible engine. An offshoot version of the standard TH350, the BOP (Buick, Oldsmobile, and Pontiac) works with the Pontiac V8. You can differentiate the two models by looking at the block flange. The Chevrolet model has a peak; the BOP version has a valley.

If you want the best of both world, look at getting the TH350C Unicase. It is compatible with Ford, Chevrolet, Buick, Oldsmobile, and Pontiac motors. It also has a lockup torque converter. You can distinguish this transmission by the letter C engraved nest to the pump bore. On the front.

Aside from the front bell, there are no differences in the transmission’s physical layout.

Scroll back to top
0
0
Would love your thoughts, please comment.x
()
x
| Reply