While manual transmissions have remained relatively unchanged over the years, electronically controlled automatic, semi-automatic, and continuously variable transmissions (CVTs) have become increasingly complex, but also easier to use than ever before. However, modern transmissions of all types have become more prone to failure, primarily because of this higher level of complexity.

The following guide outlines the inner workings and differences between the most common types of transmissions and lists the primary advantages and disadvantages of each.

As the name suggests, the selection of gear ratios on manual transmissions is accomplished by manually shifting a gear selector mechanism that disengages one gear and selects another. Most modern types of this transmissions have five or six forward (and one reverse) gears.

This type of transmission is connected to the engine via a clutch, which if disengaged (by pressing the foot pedal or hand lever), removes torque from the system. With the clutch engaged, power is delivered to the transmission through an input shaft that is separated from the primary cluster, and which can rotate at a different speed to the cluster. The cluster is comprised of gears that can be moved to either engage, or disengage from fixed gears on the secondary shaft, which is normally located below the cluster gears, and supported by roller bearings in its casing.

When shifting into first gear (for example), the gear on the primary shaft is slowed down by a synchronisation mechanism, and aligned with a gear on the secondary shaft. The current gear is always disengaged before the next one is engaged.  When the clutch is re-engaged, rotational energy is transferred from the transmission to the axle(s) by the drivetrain. 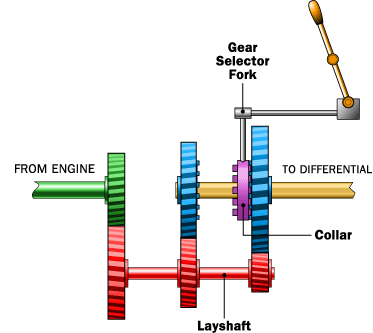 By using progressively smaller ratios, the speed of the vehicle can be maintained or increased using less power from the engine. 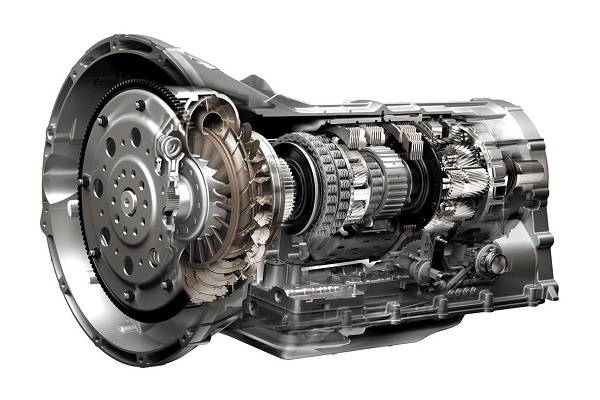 In an automatic transmission, the hydraulically operated control systems are managed electronically by the vehicle’s computer instead of the clutch and gear stick. All the driver has to do is shift the selector from Park (P) or Neutral (N), into Drive (D), and the gear shifting will take place automatically and smoothly, without any additional input from the driver under normal driving conditions.

Provided all necessary conditions are met, and there is agreement between the Engine Management and Transmission Control systems, pressurized transmission fluid is automatically channelled to mechanisms that drive sets of planetary gears and clutches, which are roughly analogous to the gear ratios found in in this type of transmission. 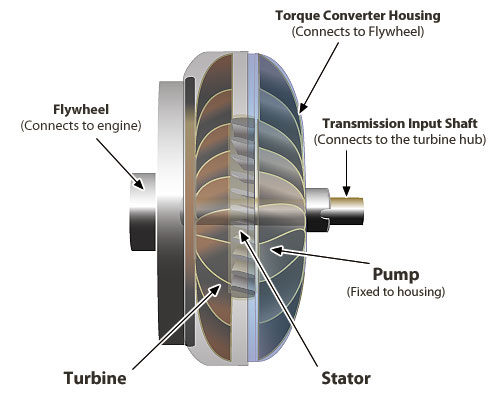 Also known as an “automatic manual” or “clutchless manual” transmission, the simplest way to describe this type is to call it a hybrid between a fully automatic and manual transmission.

Similar to a manual transmission, gears are changed via a simple shifter or paddles located behind the steering wheel. However, there is no need to operate a clutch pedal. Processors, sensors, pneumatics and actuators are all used to “automatically” shift the gears once the drive has signalled the change.

The basic principles of shifting mechanical gears in a semi-automatic fashion have been in use on heavy commercial vehicles for many years. The latest and best designs provide lightning-fast, almost undetectable gearshifts.

The design of these systems varies, but all semi-automatic transmissions rely on microprocessors to control the changing of mechanical gear ratios with the help of electrically operated actuators and servos. These transmissions were limited to high-end supercars at first due to their high cost, but an increasing number of manufacturers are fitting them to mid-range cars.

Dual clutch systems employ two clutches, one controlling gearshifts in the even numbered gears and, anther that controls the odd numbered gears and reverse. This arrangement does not interrupt the power flow from the engine. The driver still has to initiate a gearshift via a shifter or paddles located behind the steering wheel, but there is no need for the driver to operate a clutch.

Unlike the others on this page, this transmission doesn’t use gears as its means of producing various vehicle speeds at different engine speeds. Instead of gears, the system relies on a rubber or metal belt running over pulleys that can vary their effective diameters. To keep the belt at its optimum tension, one pulley will increase its effective diameter, while the other decreases its effective diameter by exactly the same amount. This action is exactly analogous to the effect produced when gears of different diameters are engaged.

Since one pulley is driven by the engine and the other is connected to the drive shaft, an infinite number of ratios can be produced. This enables it to always run at the most efficient speed, regardless of the load placed on it. Microprocessor-controlled sensors quantify load variations and by adjusting both pulleys, the optimum operating speed for the engine can be maintained without any input from the driver.

If you have a question, let us know in the comments and we’ll do our best to help you out.

What to Read Next

“Cannot provide engine braking” what does it mean in CVT disadvantages

“Cannot provide engine braking” means it free spins on deceleration and has no way of holding the engine back.

Hi! My Nissan vanette (automatic) engages reverse only no forward on drive! Whats the cause?o

Why there is oil cooler in CVT transmission? In fully automatic, fluid is responsible for torque transfer. What is the role of fluid in CVT?

what’s the maximum speed or power output for CVT engines?

I have a CVT on my 2013 Nissan Sentra SR. It’s horrible, I’m about to have the 3rd transmission put in. Fortunately, it’s under warranty. I’ve had all the recommended services, and I’m not a crazy driver. I’m just gonna trade in this time.

Does some vehicles possess CVT as an optional along side ordinary automatic transmissions?

Hi
My car pulled dead when I reversed my car.
Next morning there’s no reverse on my car.

During day I pushed it out of my yard,when driving in to corners I can hear the reverse magenism falling or moving around.
I’ve been to the macanics a few times,every time it something different.

Now they took out the gearbox and find out now,the spring that engage the reverse onto shaft,are weared out.
I need to replace the spring a complete magenism,but the macanic don’t know what its called.

Anyone that can help please do,my car have to undergo test at at traffic department…

Any help would be appreciated.

Anyone know differences between cvt and ect .. to be specific advantages and disadvantages and latest progress and studies on ECT .. any book or papers etc

why does the cvt trans row forward when its still in gear??

Great exposition of the parts and function of transmissions in general.
Thanks for sharing your knowledge. I continue to learn.
Professional Honda Mechanic of 36 yrs

I would like to know how difference between auto gear position? I mean zigzag and inline pattern. Which one is more better?

how cost a repair manuel for transimission cvt for toyota cars

I have a 2005 Honda Civic hybrid.. Automatic… Everytime I let go of the gas my car jerks one after another.. Is that normal in a cvt transmission? And when I press on the gas the car jumps. Feels like the gears are popping out and engaging again..

I bought a fairy used Nissan Pathfinder 2002 model, unfortunately, along the way the reverse gear failed to work. When you engage the reverse gear the vehicle would not move backwards but the drive gear is working. What could be the problem.

My side by side Massimo 500 will not go into or come out of gear while running. Can the ctv cause this? And while in neutral and running primary and secondary are turning. Should they be?
Thanks for any help.

My engine light came on, I was told that i need a Transmission control
module repair I would like to know how much I will have to pay?

My VW golf 4, leaked auto fluid, and it couldn’t move while on drive (sounded as if in neutral), I put off d engine and engaged, it selected and I drove 5poles to a maintanance shop and withing 15 mins,I had the oil drained and new oil fixed. It engaged again and on my way home, it repeated d same non moving as if its in neutral. I put it off again and started, for the rest of my 30 mins drive to my house, it didn’t happen again, do I have to do anything else? Pls advise me.

Hey , can anyone pls tell me what kind of transmission is there in a 4×4 rally truck ? Thanks

Scroll back to top
24
0
Would love your thoughts, please comment.x
()
x
| Reply