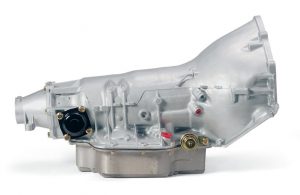 The TH400 originated in 1964 to replace the ST300 2-speed automatic transmission. In 1965, Cadillac, Oldsmobile, and Chevrolet vehicles adopted the TH400 over the ST300 due to the improvements that were made.

The TH400 is a venerable transmission that has its roots in mid-century automotive tradition but has since been modified for modern use. It is an automatic shift, positioned longitudinally behind the engine for the best power ratio and durability for rear-wheel drive.

It can put out at least 400 foot-pounds of torque at market specs, but enthusiasts have been known to modify it and increase performance further.

The TH400 has been around since the 1960s, initially for use in heavy duty trucks as both two-wheel and four-wheel drive. GM was the primary manufacturer that used the 400, but gradually, the transmission found its way into a more versatile set of vehicles, like the Rolls-Royce and even the military jeep.

To make it easier for buyers to recognize the transmission, the TH400 was renamed in 1990 to the 3L80. As with other transmissions, the naming scheme tells what the part can do.

The “3” means it has three forward gears and one reverse. The “L” indicates it as longitudinally positioned, or parallel to the truck’s direction of travel. The “80” indicates that the vehicle has an 8,000-lb. GVW, or Gross Vehicle Weight. The GVW refers to the weight of the vehicle itself and any load it is carrying. Later, the 4L80E was introduced as an updated version of the 4L80.

Because the TH400 is so robust, it is popular for use in jeep conversions and sport applications.

The TH400 is 24.37 inches long, usually positioned at the center of the vehicle behind the engine. Because of its aluminum and iron construction, it weighs in at 135 pounds without fluid. Recommendations on the amount of transmission fluid to be used vary from one instance to the next on several factors, including the type of torque converter. You can expect to use between 11 and 12 quarts of fluid in the stock version.

The distinguishing features of the TH400 are the main casing of smooth cast aluminum alloy. Its length is around 24.37 inches. The rear mounting face uses hex bolts, with the ribs running parallel to the body of the transmission.

It has a fluid pan with an easily distinguishable shape, almost like a distorted version of the state of Texas. Compared to the other transmissions in the GM series, the TH400 is among the largest but provides more power than even its size would suggest.

GM made two main variants to the TH400 that can be found in certain types of vehicles. First, the TH375 came about in 1972. It saw use in small vehicles and could be identified by its “375-THM” lettering etched on the bottom of the tail housing. The other variant of the TH400 was the TH475, which was a heavy-duty transmission used in larger trucks.

You can also identify the TH400 by checking the kick-down assembly. Look for an electrical switch connected to the throttle linkage mechanism. The TH350, on the other hand, uses a mechanical relay rather than an electrical one.

For earlier vehicles, such as the Buick from 1965-1967,it used a variable pitch stator with a double plug. This plug would later be used for the spark system in models from 1970 to 1974.

Common Problems With the TH400

When the engine revs high, it tends to shift early and lessen efficiency. This often happens because the kick-down switch does not function. The kick down switch is responsible for the shifting of gears and maintaining max RPMs to ensure the most efficient power usage.

The chief cause of this problem, in turn, is improper replacement of the vacuum hard line traveling from the intake manifold with a pliable rubber line. The heat generated by the engine and transmission cause rubber to deform and not hold pressure properly.

To prolong the life of your transmission, you can take several preventative maintenance precautions. The most important one is to know what load your truck can handle. These figures can be found in the operating manual; you should pay particular attention to the tow rating and the payload rating. Also, know that these two numbers are not the same thing. Do not exceed either of these measurements.

Accelerating too quickly or slamming on the brakes can also damage your transmission. Use the gas pedal and brake smoothly. This reduces wear on your tires and makes you a safer driver because you aren’t as reliant on reaction time.

Replace transmission fluid regularly and check it. If you have an automatic, you can simply read the dipstick. Manual transmissions are more complicated. Have the fluid changed if it starts to get dark or lose its lubrication.

Take your vehicle to a mechanic regularly to get it checked. Oil changes should occur every 3,000 miles, but transmissions can last for 60,000 without maintenance.

Signs That Your Transmission is in Trouble

Your transmission is a hardy and well-designed piece of machinery, but over time it is subjected to serious wear and tear. Small issues can quickly become big ones, leading to the need for a replacement. Keep your senses open for changes in how the vehicle performs or for odd sounds you might hear.

The first indication you might see is the transmission or engine light comes on at your dashboard. If you feel comfortable driving, you should then drive to a local mechanic who will plug a diagnostic computer into the port.

The resulting error code is keyed to a specific problem with electronically controlled transmissions. If you have an older one, it may be harder to diagnose and get a proper quote.

The next thing you should watch for is fluid leakage. This is an obvious sign that something isn’t working because transmission fluid is designed to remain at a constant level. It provides lubricating and cooling functions for the interior of the transmission, and losing this fluid can be catastrophic.

As for why it occurs, it could be a valve not closing, a vacuum seal not being set properly, or even a ruptured pan. By placing a square of cardboard or similar material under your vehicle and watching for drips, you can determine whether there is a fresh leak.

Even if the fluid is all present, it can overheat and burn, leading to a pungent odor that you’ll notice even without opening the hood. Burning transmission fluid cannot do its job.

When you drive, keep the radio volume down. It helps to be able to hear any sounds that should not be present, like a loud clunking or grinding when shifting gears. Most of the time, sounds are the result of impending mechanical failure. It can be loose housing, stripped gears, loose gear teeth, or any number of things.

Pay attention to how the vehicle feels when accelerating or slowing down. Jumpy starts or stops, or shimmying, indicate transmission problems. You normally should not be able to feel much.

Delayed gear engagement is another symptom. Normally it is a near-instant change from one gear to the next, but faulty gearboxes, pumps, and other components can cause a delay of a few seconds or more.

If your transmission simply doesn’t work at all, you have no choice but to replace it. Too many things could have caused it to stop functioning to diagnose a repair. This is the most obvious sign of a bad transmission, but it is rare that it will stop working all at once.

Error code? Have you guys driven a 196x or 197x anything? There was no OBD or CAN system when TH transmissions were designed. The best tool in the box to start troubleshooting with was often a vacuum gauge. The idiot light usually came on after one of two events happened: coolant leak, or brake hose failure. You could tell it was about to come on typically by the steam rolling out from under the hood in most cases. If you had aluminum heads in that day [not many did], that was also your indicator to pull heads, check for warpage, and decide on repair or replacement.

installing a dry 375 trans and torque converter. how many quarts of fluid do i add?

Scroll back to top
5
0
Would love your thoughts, please comment.x
()
x
| Reply