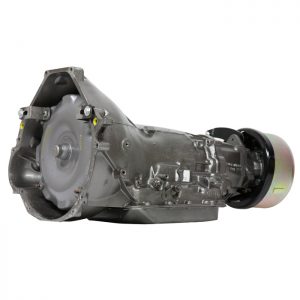 Produced from 1966–1996, the Ford C6 transmission is a heavy duty 3-speed automatic gearbox that saw use in some of the Blue Oval’s most popular models. It was called the “SelectShift Cruise-O-Matic” in the early days, and because of its ability to handle more torque than the C4 transmission, it was commonly used behind the big engines in full-size sedans and pickup trucks.

This was a completely mechanical automatic, so it didn’t have a lockup torque convertor or overdrive gears. The Ford C6 was also the first automatic transmission to be completely designed and built by Ford Motor Company. And it would eventually serve as the basis for Ford’s first electronically controlled heavy duty transmission, the E4OD.

The predecessor to the C6 was known as the Ford MX transmission (it was designed by Borg-Warner), and it was quite heavy (it actually had a cast-iron case) and complex. To address these issues without making their new transmission any larger, many components inside of the Ford C6 were made from powdered metal, and the transmission case was made from aluminum.

The new transmission used a much simpler 3-speed Simpson compound planetary gear set, and the C6 was the first autobox to use the Borg-Warner flexible shift band. Low and reverse gears used clutch disc plates, and there were also advanced (for the time) composite plates and valving. All of this gave the Ford C6 a maximum torque capacity of 475 lb-ft. Making it the perfect transmission for Ford to pair with their 351W, 351C, 428, 429, 460, and 462 gasoline V8’s. Along with the 7.3L diesel.

Diesel Pattern – Similar to the FE pattern, but not interchangeable
Fits:

Lincoln MEL Pattern – Similar to the FE pattern, but not interchangeable
Fits:

As a result, there were a number of variations to the case design, the pan, and the tail shaft. If you are planning to install a C6 transmission into a project vehicle, you need to make sure that it will fit your application, and that you’re using the correct torque converter.

This transmission is very popular for off-roading and drag racing, but it’s mechanical 3-speed design requires a lot of horsepower to operate. Which may reduce the fuel economy in road cars.

In order to reduce weight, the Ford C6 transmission features a one-piece case design (the case and bellhousing are integrated), made from cast aluminum alloy. Over 10 lbs of powdered metal were used to make many of the internal components, which cut even more weight when compared to the cast iron Ford FMX transmission.

Thanks to these cutting-edge materials (for the 1960’s), the dry weight of a C6 transmission is 140 lbs, plus 30 lbs for the torque convertor. It requires 7-quarts of Type FA transmission fluid with the stock pan, plus an additional 2–4 quarts for the torque converter. The case length is 22-3/8”, but the overall length depends on which tailshaft housing is used – Ford cars: 14-in – Ford trucks: 7-in – Lincoln: 17.4-in.

No forward or reverse gear engagement

One of the most common C6 transmission problems is the complete lack of forward and/or reverse gears. The cause could be as simple as a low transmission fluid level, or a clogged transmission filter. But it could also be a stuck valve inside the valve body, a faulty torque converter, or the shift linkage may have become detached or broken.

If your C6 won’t upshift from first to second gear, then there could be a number of problems. It could be a bad governor, shift valve, servo, or one-way clutch. Many of these problems are related to age and mileage. However, shift kits and other upgrades will significantly increase the service life of your transmission.

Slipping in, out of, and/or between gears
Probably the most common C6 transmission problems are slipping between the gears, out of gear, and the hesitation to go into gear. The first thing you should check is the fluid level. If there is too much or too little transmission fluid, this problem can occur. It could also be a blocked transmission filter, a transmission pump problem, a bad vacuum modulator, a faulty torque converter, or an improperly adjusted transmission clutch / transmission band.

If you need more performance from your C6 than the stock setup will provide, then you should consider a Ford C6 transmission kit. These are modification packages for the valve body, and are typically available in towing, performance, or racing specification.

Each one contains parts that will change the line pressure, so the transmission will have more holding power for the bands and clutches. Thus preventing slippage during extreme use conditions. Race-specific input / output shafts and hardened planetary gear sets are so available.

Hey everyone, I have a 79 F150 with a 302 V8 in it, and the truck will not shift into drive but reverse works very well. Any thoughts?

Forward clutches are worn out and needs a rebuild.

I have a 1972 Ford F 250. Just put in a Blueprint 302 with a new Boss Hog Night Stalker Torque Converter 1800 to 2200 stall. I changed the fluid, filter, cooling lines and ensured the torque convertor was seated correctly. It moved freely on the flex plate. It now wont go into gear going forward and when I try to put it into reverse, it goes in slowly, but will not move backward, almost like its binding. Checked the fluid levels, put 8 qt. of type f in the case and 2 qt in the torque convertor, Any ideas. It worked find before the engine swap.

I have a 1976 ford f100 that has had a C6 put into it it was originally a standard 3 on the tree…i had some slipping and fluid was low come to find out one of the lines was leaking…on my dipstick it is hard to tell the exact level of fluidas it has fluid that hold up on the dipstick just about every time would my best bet be to use a pump and pull all the fluid out of the pan and then just add 7 quarts???
( i am extremely gun shy when it vomes ti transmissions cause even tho it was just a bad measurement i out too much fluid in a jeep i had one time after i had to make my own dipstick and measured it wrong and i burnt that puppy up…i have limited cash and do not need that problem again so plz yalls expert opinion is needed

Have 1989 f-350 U-Haul box truck I had a cracked pressure plate I replaced it and a brand new torque converter low stall speed. Started off about 35 40 miles an hour and it kicked out of gear I let coast back down to about 15 or 20 and then it would engage back into gear.
will not shift or jumps out of 3rd gear. At about 35 40 miles an hour. Goes in reverse but still struggles when starting off into first I checked fluid level I added a total of 1112 quartz what about two and a half quarts in the torque converter. I don’t know what else to do please provide me with any information.

I have a 88 e 350 box van 6.9 diesel starts wont go into any gears… Wont start in gear or if unplugged… Fluid isnt burnt … Where do i start to find the problem ?

The 6.9 uses a vacume pump to operate the transmission vacume modulater

When I drain my, C6, how much fluid can I “assume ” is retained by the converter. I have an oversized pan which results in 12 quarts to fill. After draining, should I add 11 quarts?

Hi. I recently removed my C6 to fix a leaking transmission pump seal. I also removed the filter to inspect everything. When I reinstalled I forgot to fill the torque converter with fluid. I filled the transmission and let it run for 10 minutes. It works fine in reverse, but will not go forward in drive. It is a 1988 bronco wit 351w and C6 trans.

This fails to mention the MERCURY MONTEGOS as all montegos are C6 compatable. Mine has a factory C6 1972

Thank you for this video

my C6 is leaking fluid at the shift lever. is there an o ring or seal that can be replaced by simply removing the lever while it is in the vehicle?

You’ll also have to remove the pan, valve body and the retaining nut inside the case. Then the outer shaft can be removed. When you do, be sure the parking pawl linkage doesn’t pop out or you’ll have to pull the tailshaft housing to put it back. Not fun.

I have a c6 tranny that I’m putting with a 460 ford engine. What is the right torque converter and fly wheel do I need to make this work please

Has anyone answered you?

All C6 flywheels for 460’s are the same. Just get one for the year model of the engine or transmission.

my C6 transmission has stared to slip,jerk some before properly going into reverse gear . all forward gears are fine. the reverse thing is not an everytime thing. Is there a way to adjust or fix problem without pulling tranny?

if you remove the pan, At the end of the valve body.(meaning close to the mount) there is a plate with 3 or 4 bolts holding it down. They are known to become loose. Check those bolts. If that isn’t the problem then you are going to have to pull it and have it rebuilt. There is no adjustment for reverse on a C6.

The output shaft on a 4wd c6 is shorter than a 2wd c6. you’ll have to tear the trans down and change the output shaft. If the transfer case fits a c6 the shaft change is all you need. If it doesn’t then look for an adapter.

I have a 70 f250 4×4 has manual transmission and i want automatic without changing the transfer case its a danna 24 and not married to the trranny.wonder would that be possible and how hard and expensive

I was adjusting band on 89dually c6 with gear vendor book said ” inch pounds I did ft pounds and snapped the band and fork everything ? Cheaper to fix or buy new transmission

Bummer. If I remember right, there is a band called a snap band that you can sneak in it without removing the tranny. I know there is one for the C4 but I think there is one for a C6. Really easy to install.

Hi, I have a C6 auto box behind my 390 and would like to know what gearbox oil is recommended.
Thanks

My builder recommended Dex/Merc on a fresh rebuild. It was cheap and easier to find then the F-Type.

Have 1990 f-250 camper van. Trany boilded over, ran fine until weather got cold. Now periodicly sometime will not shift or jumps out of 3rd gear. Had fluide drained and new put in. Still not shifting right. Any cure without rebuilding?

I have the same problem what did you do to fix this issue?

Scroll back to top
61
0
Would love your thoughts, please comment.x
()
x
| Reply