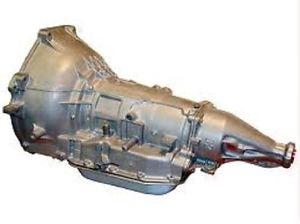 The 4R44E was Ford’s popular transmission for light-duty vehicles such as trucks and smaller SUVs from 1995 to 2001. It is an automatic transmission with four speeds and has roughly 440 foot-pounds of torque capacity at its maximum.

Every transmission’s model number and name denotes what it can do. In the case of the 4R44E, the “4” means it has four forward gears plus reverse. The “R” means it is a rear-wheel drive transmission. The “44” denotes the torque after a tenfold torque conversion factor. A heavier-duty model, the 55E, can generate 550 foot-pounds of torque. The “E,” meanwhile, denotes it as an electronically controlled transmission.

The original 4ALD model mainly saw use in the Ford Scorpio but has since expanded into other vehicles. The 4R44E and the 4R55E have the same basic design, but different component strengths based on the projected need for their operational duty. Light-duty cars got the 440, while heavy-duty trucks or jeeps got the 550.

The 4R44E was placed in vehicles that were intended for light duty, mostly ones with a 4-cylinder 3-liter engine. The most well-known of these is the Ford Ranger. Meanwhile, the 4R55E could be seen in vehicles with a Cologne V-6 4-liter engine. Later models of the Ranger fit this category, as did the Ford Explorer.

In 1997, the 4R55E began to be phased out of vehicles, being replaced with 5R55E. As the name suggests, the 5R5E has five forward gears. Meanwhile, the 4R44E persisted until the turn of the millennium. After this, it saw less use and was replaced by the 5R44E. This transmission allowed more speed and acceleration.

Common Problems with the 4R44E

Although the 4R44E was a dependable transmission for its time, it was not without issues. Here are a few of the more well-known ones. Knowing them can allow you to repair or replace the faulty component.

3rd gear and 4th gear do not function: It’s possible for the shift valve spring between 2 and 3 to go missing. Also, it could be incorrectly installed. If this happens, the vehicle cannot shift higher than second gear.

Neither 2nd nor 4th gear work properly: If this problem occurs, the solenoid regulator valve has likely come out of its proper position. You’ll need to look at a shop manual for your vehicle to determine what this position should be.

The vehicle cannot upshift at all: Similar to 2nd and 4th gear not working, it’s possible that the solenoid regulator valve has moved out of its proper position.

Vehicle delays when switching to reverse from any forward gear: Any time the valve body separator plate is removed and replaced, it has to be realigned properly with its pins, Failure to do this causes an internal leak and a subsequent drop in line pressure, in turn resulting in a delayed shift.

How to Prolong Your Transmission’s Lifespan

To keep your truck’s transmission running smoothly, you can take several precautions. You always should consult the owner’s manual to know what the safe operating parameters of your vehicle, including payload and tow weight.

If you exceed your operating capacity, the transmission has extra effort to make to provide power to the wheels. Know what the difference is between towing capacity and payload. Towing capacity what the truck can pull, and the payload is what it can carry. Anything in the truck, including passengers, contributes to the truck’s payload.

Keep an eye on your service lights and fluid levels. If you notice transmission fluid darkening or getting dirty, it needs to be replaced so it can do its job of cooling and lubricating the moving parts of the transmission.

Regular service according to the instructions in your owner’s manual is mandatory to keep your transmission functional. Usually, it should happen every 60,000 miles. Your mechanic should provide a reminder of when to bring your truck in for servicing.

Accelerating too quickly or slamming on the brakes can also damage your transmission. Use the gas pedal and brake smoothly. Gradual speed change reduces wear on your tires and makes you a safer driver because you aren’t as reliant on reaction time.

Signs of a Faulty Transmission

Your truck’s transmission provides power from your wheels to the engine using a complicated assembly. Even small problems with it can accumulate and compound into something that requires complete replacement of the transmission.

The biggest or most obvious problem is a lack of response. If you shift gears and the vehicle does not move or change speed. Any number of things could cause this problem, but it’s more likely that a minor problem will occur first.

Another sign is a loud clunking or grinding sound when shifting gears or simply driving. There should be practically no sound when driving, aside from that of the engine. Sounds indicate mechanical wear and tear, usually gear teeth. The gear teeth press against one another to transmit force through the transmission and wheel assembly.

You could also be experiencing delayed gear engagement. The interval between when you shift the gearstick to the time the transmission shifts gears should be practically instantaneous. If you experience a delay in the vehicle’s motion, take it to a mechanic.

An automatic transmission that has problems may cause the truck to vibrate more when shifting between gears. The transition should be smooth.

A fluid leak is a telltale sign that something is wrong with your transmission: a valve may not have closed all the way, or a cover may have cracked. Unlike engine oil, transmission fluid is meant to stay where it is and not be burned off. Therefore, you should not see leakage. To check, place a square of cardboard under the front of the truck and watch for spots.

Also, pay attention to the smell coming from your transmission fluid. If you detect a burning odor, it is a sign of an overheated transmission because the fluid is intended to lubricate and cool the internal parts.

You might be able to tell there’s a problem with your transmission just by turning the key. If the transmission or engine light comes on at your dashboard, you can then drive to a local mechanic who will plug a diagnostic computer into the port and use the error code to diagnose your problem and quote an estimate.

Will the slip yoke of a A4LD tranny drive shaft, fit the output shaft of a 4R44E tranny?

I have a 2000 Ford ranger with a 4r44e transmission. I bought it with no reverse. I drove it for almost a year like this and still worked great going forward but I just had the thing rebuilt cause I was pushing fate that it didn’t break down somewhere. The problem was the transmission reverse clamp that clamps down on the gears for reverse to engage. I’m hopefully getting it back tomorrow. I couldn’t find a new clamp anywhere til I went to a transmission shop and they gave me a used one that was in great shape!! Thank you goes out to ALL ABOUT TRANSMISSIONS in Bremerton Washington!! I gave the shop some after work beer money as a thank you for the part!!

Well my Ranger is a 98′. But my automatic transmission has problems switching gears. I’ll accelerate and when my truck gets to about 600 rpm it won’t switch gears. Why could that be?

2011 Ford Ranger auto transmission 5R44E will not shift into 4th

2001 Ford Ranger 3.0L V6 RWD. Recently when I have been shifting into either reverse or drive there will be a loud clunk followed by a harsh jerk. I haven’t been having any problems with the transmission shifting throughout 1st-5th gears. I am just wondering what could be causing this and if there may be a possibility of needing to rebuild the transmission. The transmission has never been rebuilt and is currently sitting at 150,000 miles. Please give me any pointers or information about this, I would greatly appreciate it. 🙂

I transmission pan oil pan is leaking i’m going to change that and I have not a matic transmission for our 4:40 Dan I have to put into second to go and then put it into drive after I get going easy that’s pretty good phantom maybe do I change my transmission oil pan hopefully this problem. You think

Transmission pan leaking if I fix will slipping

That is what ours was. It works well after we rebuilt it.

Its not necessary, you have residual fluid that prevents it from starting “dry”

The 4r44e has adjusters for when it shifts. One on the outside of trains housing, and one in the inside that you can see once you drop the pan. I know that once you set the torque lbs you turn the one on the outside back 2&7/8s turns back, and after you set the one on the inside you turn it back 2 full back. But I can’t find what torque lbs you are supposed tighten them to. So please let me know if you can, what the torque lbs for each one is.

Well you’ve probably done figured it out bye now but check your fluid if it’s ok and you have no,movement you probably need another tranny

Scroll back to top
26
0
Would love your thoughts, please comment.x
()
x
| Reply